a study on HIV/AIDS 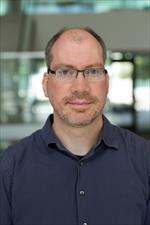 This is a single center exploratory imaging study involving one intravenous microdose of 89Zr-DFO-VRC01 followed by whole-body PET-MR imaging in HIV infected individuals and healthy volunteers. Imaging data will be obtained from up to four static PE-MR images in order to determine dosimetry and temporal tissue uptake/tissue distribution of 89Zr-DFO-VRC01. This is not a treatment study of the biological activity of 89Zr-DFO-VRC01 to impact HIV persistence.

This will be a single-center pilot study to determine dosimetry and tissue uptake/distribution and pharmacokinetics of 89Zr-VRC01. Up to 18 uninfected and HIV-infected subjects who are either taking or not taking ART will receive a small IV dose of 89Zr-VRC01. After administration of IV 89Zr-VRC01, subjects will undergo up to 4 whole body PET/MR imaging at 2, 6, 24 and 72-120h to determine the pharmacokinetics and radiation dose exposure. The study involves two phases with the second phase only to be performed only if a difference between PET activity in one or more region of interest can be determined between participant groups Phase I (HIV infected, viremic participants and healthy volunteers). Initially, up to 6 individuals with plasma HIV RNA levels >1,000 copies/ml and up to 6 HIV-uninfected individuals will be administered 89Zr radiolabeled VRC01 followed by PET-MR imaging as above (Phase 1). If differences in PET activity in one or more imaging region of interest can be identified between infected and uninfected individuals, up to 6 individuals on suppressive ART will be administered 89Zr radiolabeled VRC01 followed by PET-MRI (Phase 2). Timing of the PET-MR scans will be determined based on the data from Phase 1.

Open to people ages 18 years and up