a study on Post-traumatic Stress 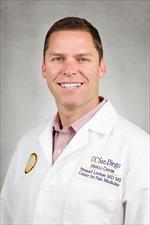 The proposal aims to determine if non-invasive vagus nerve stimulation(nVNS) will alter: 1) the peripheral inflammatory biomarker profile, 2) the neural correlates of change in pain stimuli and 3) PTSD symptom severity and 4) life quality and function in Veterans with PTSD. The planned inflammatory biomarker and neuroimaging results can 1) promote knowledge of inflammatory and neurobiological mechanisms that contribute to pain in PTSD, and 2) advance the ability to provide targeted neuromodulation based interventions that support improved life quality and function for Veterans. These goals are consistent with the VA's mission to sponsor research examining variables related to pathogenesis, diagnosis, and(ultimately) treatment of neuropsychiatric disorders.

Rates of posttraumatic stress disorder (PTSD) are high among combat Veterans with estimates of PTSD within Iraq and Afghanistan Veterans at nearly 17% of active duty and over 24% of reserve service members that screen positive for PTSD. Studies from the current and prior wars have demonstrated that mental disorders, in particular PTSD, are associated with higher rates of: 1) physical symptoms, 2) chronic physical illness and 3) overall mortality. Rates of comorbid PTSD and chronic pain are exceedingly high among Veterans with reports of 30%-50% in both Vietnam and OEF/OIF Veterans, that suggest a shared pathophysiology. Excessive release of peripheral pro-inflammatory cytokines has been implicated in the generation of: 1) pathologic chronic pain states and 2) in PTSD. Perception of an aversive stimulus/threat activates peripheral inflammatory cytokine release, while exogenous administration of an inflammatory stimulus (that also cause release of peripheral inflammatory cytokines) increases the limbic (insular cortex and amygdala) response to aversive/threat stimuli as measured by functional Magnetic Resonance Imaging (fMRI). Work by the investigators' group shows that PTSD influences the: 1) nociceptive response, 2) intrathecal cytokine release and 3) peripheral cytokine release in response to a painful stimulus when compared to responses of Veteran combat controls (CC). Vagus nerve stimulation has been shown to decrease: 1) peripheral inflammatory cytokine release, 2) pain, and 3) anxiety.

Recent work by the group has shown that non-invasive vagal nerve stimulation (nVNS; using extradermal stimulation) decreases peripheral inflammation in healthy control subjects and may similarly decrease hyperinflammation observed in PTSD. In pilot work, the investigators have obtained initial fMRI evidence (preliminary data) suggests that in healthy controls, nVNS decreases insular response to painful stimuli, which is known to be dysregulated in PTSD.

The investigators plan to use nVNS as a probe in PTSD and CC to observe the effects of vagal nerve modulation on: 1) CNS neural circuit function during pain and pain anticipation stimuli, and 2) peripheral inflammatory biomarker measures. The long-term goal of this line of research is to use nVNS as a probe to obtain pilot data of: 1) peripheral inflammatory biomarkers and 2) fMRI derived brain imaging response to pain, to advance the understanding of fundamental pathophysiology of co-morbid pain and PTSD and to ultimately provide, targeted neuromodulation based interventions for Veterans with pain and PTSD. The investigators will study two groups [(PTSD, CC), (both without chronic pain diagnosis)], under two conditions (either nVNS or Sham stimulation), over three time points (pre-nVNS/Sham), (7 days post-nVNS/Sham) and one month after treatment (one month post VNS/Sham). The first objective of this proposal, is to measure peripheral inflammation in response to nVNS treatment in order to delineate peripheral inflammation based biomarker profiles of treatment responsiveness to nVNS in PTSD and CC. The second step is to measure brain region response to a pain and pain anticipation stimuli task before and after nVNS treatment in order to demonstrate: 1) a neural profile of treatment responsiveness to nVNS and 2) the neural profile of nVNS effects on pain in PTSD and CC. Participants will receive a 7-day long nVNS/Sham trial where inflammatory biomarkers, neuroimaging tools, PTSD symptom severity and functional life quality will be assessed before and after the 7 days. Additionally, PTSD symptom severity and functional life quality will be assessed one month after study onset. The direct contrast of pre and post nVNS/Sham will provide an objective and sensitive assessment of neuromodulation with nVNS and lay the groundwork for further neuromodulation based study in PTSD. Such outcomes may provide additional evidence of potential treatment efficacy, thus ultimately provide therapies that enhance VA clinical practice guidelines.